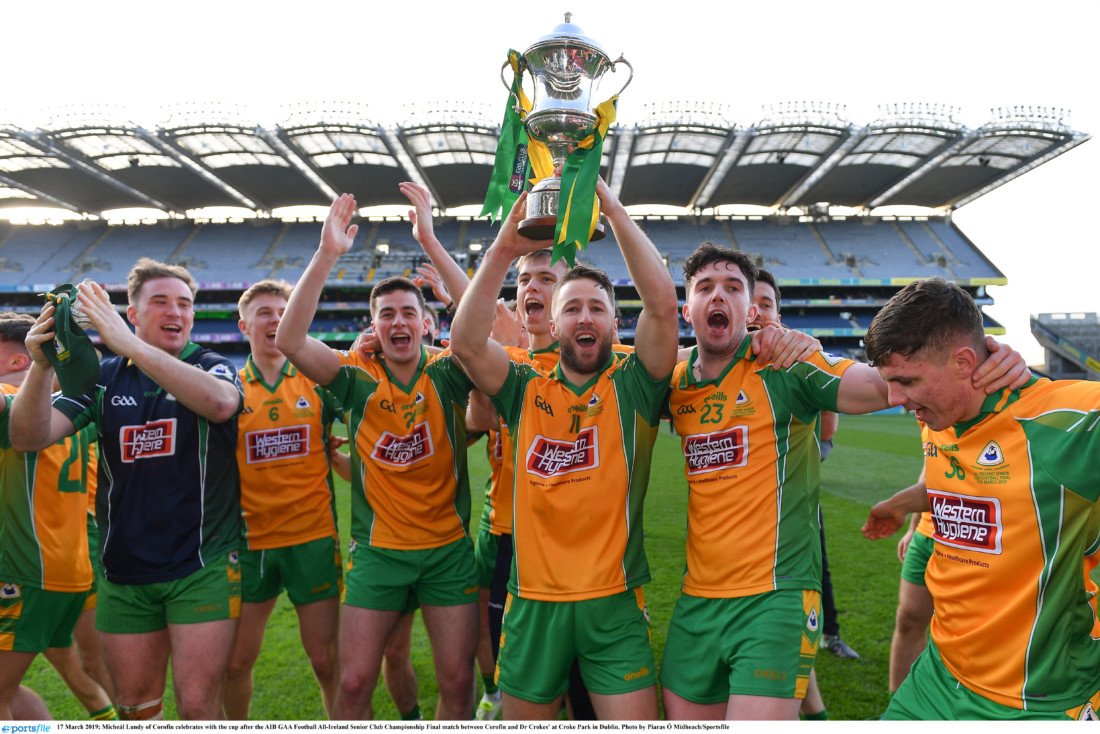 MARCH 17, traditionally known as the biggest day in club football and hurling. Saint Patrick‘s Day normally consisted of going to mass at 11am, back for the breakfast, head up the road about 1pm to watch the parade and then, no later than 1.45pm, the lads would shuffle into the pub find a cosy seat in front of the TV, order the stout and watch the cream of club football and hurling.

We miss those days and hopefully we can get back to that someday soon. I understand that over the last year or so things have changed but I always looked forward to the Saint Patrick’s Day club finals.

Perhaps in the future this will be a thing of the past, but there was something purely magical about that occasion.

Since I started playing for Gaoth Dobhair, I have yet to miss a St Patrick’s Day routine like mentioned above. Two years ago I was working at the finals for TG4 And although it was a special being there and witnessing the likes of TJ Reid and Gary Sice strutting their stuff for their amazing clubs, my mind often wondered about that cosy spot in the bar where I knew the lads would be gathered.

Stout would be flowing and opinions of all sorts would have been fired at the TV. Those days in front of the TV with your team-mates gathered around fuelled the fire to try and emulate those scenes with your own club.

The closest we ever got to that momentous day was a semi-final appearance back in 2018 but that drive to reach the pinnacle of club football never leaves you and  seeing all those great teams climb to the highest point on Saint Patrick’s Day helps you go to the well time and time again.

I can still see those finals between Caltra and An Ghaeltacht, Cross and St Brigid’s, St Vincent’s and Castlebar and so on and so forth. They are as clear as day in my mind and that to me is what makes that day so special.

I can only imagine how it must feel for those clubs and those players who are involved in such games.

I’d imagine it’s something that sticks with you for the rest of your days. With the club calendar the way it was and the club finals running on into the following calendar year, there was no doubt that it was tough on clubs but for me there was just something special about Saint Patrick’s Day finals.

I understand with the shift in fixtures and calendars over the last number of months that this will change but whatever happens we must find a date that does these fixtures justice.

The club finals will now likely take place within the calendar year so more than likely we are looking at a November or December final date. My own preference is that we make the occasion as big as possible so with those dates in mind I would like to aim for some time close to Christmas.

With the finals traditionally played on Saint Patrick‘s Day, it was easier maybe to create that whole fanfare and excitement as it’s a national holiday. People’s spirits are higher and with no work and more free time that all adds to the build-up and atmosphere of the finals.

So if we were to aim for around December 23 we may have the opportunity to build something like we had with St Patrick’s Day.

As I headed off to Mass yesterday morning to keep up one part of my normal routine, I could only dream about the days that we once had but, please God, we will be back to something near normal soon. Beannachtaí na Féile Pádraig oraibh uilig! A very different one this year (again)!