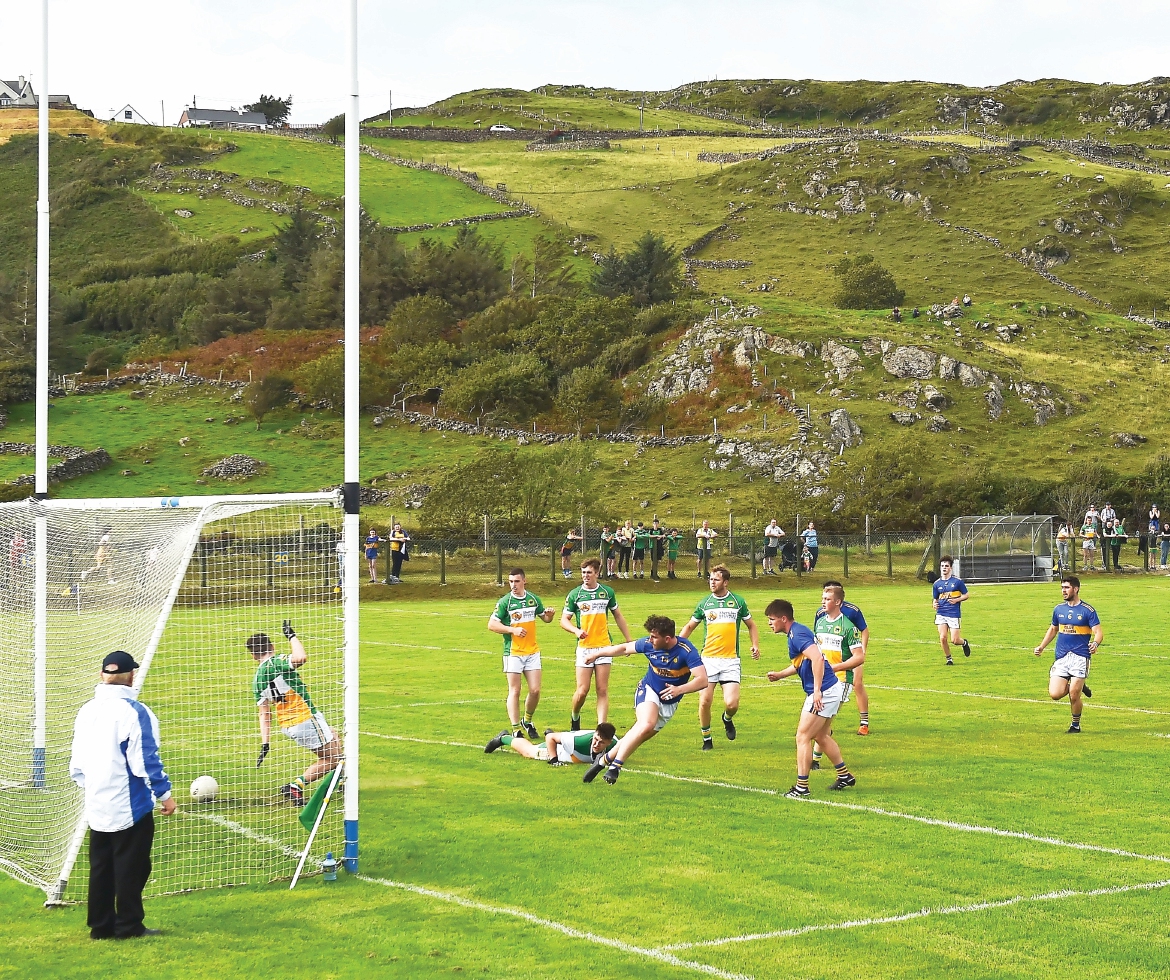 16 August 2020; Patrick McBrearty of Kilcar scores his side's second goal during the Donegal County Senior Football Championship Round 1 match between Kilcar and Glenswilly at Towney Park in Kilcar, Donegal. Photo by Seb DalySportsfile

WE are coming into the business end of things here in Donegal football championship.

This weekend it’s round four of the matches with most teams still in contention of making the quarter-final stages. There have been some one-sided contests this season but not as many as last year and that is a positive for the county as a whole.

People here in Donegal always talk about the top four (Naomh Conaill, St Eunan’s, Kilcar and Gaoth Dobhair) But it looks as if the gap has narrowed this season. At the start of the championship I tipped Ballyshannon to be competitive this year and that’s exactly how it turned out to be.

Aodh Ruadh have turned in a number of impressive performances and although they did not come away with the points all of the time they will be happy that they are at least competitive at this level and they look as if they will make it into the quarter-finals.

We played Glenfin last week in round three and again the game was ultra competitive and not as one-sided as a lot of people outside of our camp would have expected.

Glenfin have now played ourselves and Naomh Conaill, two of the so-called top four, and in both games there was very little between any other teams. It just proves that the gap that people say exists isn’t that great after all.

Elsewhere in the county the likes of St Michael’s have shown that on any given day they can be a match for anyone and then the likes of Bundoran and McCumhaills will be up there also.

Heading into this weekend’s fixtures Gaoth Dobhair, Naomh Conaill, St Eunan’s and Kilcar are all safely through to the quarter-final stages but the rest of the positions are still very much up for grabs, and I’m sure that’s exactly what the County board would have wanted at the start of this campaign.

After this weekend’s round of games the draw will be made for the quarter-finals and this year is a little different than last year in that teams are not seeded so you could draw anyone.

That means at this stage of the game you have to be near your best because the safety net is taken away after this weekend and winner takes all.

My sister in law is currently building their house beside us at the minute and while I was on my way to work on Tuesday morning I was met by two Carrickmore men who were doing doing a bit of work on the house. We had a good chat about all things football and they were telling me about some of the mouth-watering contests that will take place in the Tyrone championship this weekend.

Tyrone operate on a completely different basis in that it’s a one-game scenario with a winner-takes-all approach. I understand the thinking behind the round robin structures that most counties go with offering games to the weaker teams but for me there is something just extra special about the knockout championship.

The lads were telling me that this weekend Carrickmore take on Omagh and having played both of them in challenge games over the last number of months it’s crazy to think that one of their seasons will be over after the first hurdle. Those type of games create a fantastic atmosphere and over the next number of weeks Tyrone Gaels will have a feast of action to forward to.

I see there is a lot of talk over the last number of weeks on social media about the lack of dressing rooms available to teams as they prepare for championship games and to me that has to be addressed as soon as possible. I highlighted this issue a number of weeks ago stating that although everything else in society is returning to normal, for some strange reason dressing rooms are still closed and this simply isn’t good enough. In order for teams to prepare properly players must have an environment that they are comfortable in as they prepare to take to the field.

These players train together, socialise together, travel to college together and stay in houses together so I’m not sure what logic, if any, there is behind keeping dressing room’s closed.