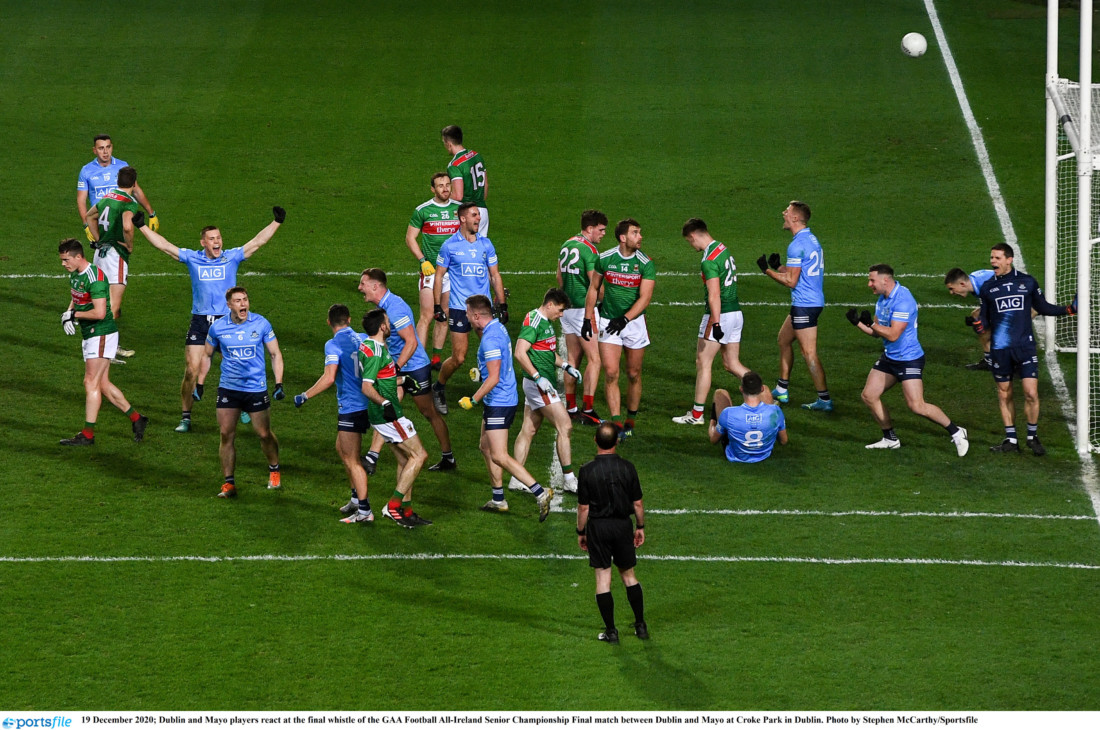 19 December 2020; Dublin and Mayo players react at the final whistle of the GAA Football All-Ireland Senior Championship Final match between Dublin and Mayo at Croke Park in Dublin. Photo by Stephen McCarthy/Sportsfile

AT half-time on Saturday evening past in the All Ireland Football final, I sat scratching my head wondering how Mayo were actually behind in the game.

It was a first half they utterly dominated and if we look at the statistical side of it, Mayo won 12 from 12 of their own kick-outs and won five of Dublin’s 10 – that’s 50 percent. Mayo had 25 possessions compared to Dublin’s 20 and despite all this they still found themselves two points down.

How that happened is a number of reasons in my opinion. One massive reason is Dublin’s ability to manage games and take back control even when they aren’t particularly at their best.

Take for example the pattern of Cluxton’s kick-outs in the first half. He lost the first two long and on the third one disguised a short one and retained possession with slow laboured, ball retention. That build-up led to Paddy Small being fouled and a Dublin score.

In around the 20th minute they again lost two long kick-outs in a row and, as a result, the next one was disguised as a short one which actually just went wrong and resulted in a hop ball.

But the idea to retain and control possession again was at the forefront of Cluxton’s thinking. Finally, in the 29th minute, Dublin lost yet another long kick-out and went short in the next one leading to a crucial Dublin score.

Game management is one aspect and something Mayo couldn’t control, but what was in their control was the shot selection and ability to maximise their scoring opportunities.

In the first half despite scoring 0-10, which is a fantastic return against the best defensively organised team in the game, they still left plenty behind.

Ruane, from the edge of the ‘D’, dropped one into Cluxton’s hands (Dublin didn’t drop a single shot short), O’Donoghue snapped at a couple, Tommy Conroy the same. Kevin McLaughlin had one blocked down, Cillian O’Connor missed a crucial free-kick at the near post, Aidan O’Shea bundled one in front of goal.

However, the key moment for me in the first half was in the 20th minute and when it was 8-6 to Mayo. The Connacht side turned the Dublin kick-out over and had an opportunity to create a score but a poor ball into O’Shea was snuffed out and Dublin went down the field and scored their second goal. Instead of being 9-6 Mayo it was 9-8 Dublin.

The reason I highlight this is because whatever chance Mayo had of winning the game, they needed to be in front at half time, but it’s also another reason why their utter dominance in the first half wasn’t rewarded.

They try and end the game there and then but after 50 minutes Mayo were still level. They had clawed back the two-point interval deficit, no mean feat when you are chasing a team like Dublin.

The same dominance though was gone, Dublin had made changes and plugged the hole that were leaking, for example the top three players in the first half for possession counts, Ryan O’Donoghue, Oisin Mullins and Cillian O’Connor, were nullified and their threat quashed. Long kick-outs from Cluxton were starting to be won and Dublin above all, were playing the game totally on their terms.

Dublin had six possessions in the first 10 minutes of that second half with the majority of them lasting well over 60 seconds. They controlled the game and took the sting out of it. They did not allow Mayo’s chaos and intensity to dictate the flow.

On three occasions in the first five minutes of the second half, the ball was kicked back to Cluxton and that was the pattern of the whole second half. It was as if Dublin were saying to Mayo ‘you have had your fun, now the party is over.’

You have to give this great team an enormous amount of credit, they are extremely driven and focused and a large part of that is down to the mentality of the players and their incessant desire to work hard.

Take Dean Rock as one example. Dropped from the panel at 22 in 2012 by Gilroy and recalled in 2013 after as superb club season by Jim Gavin, in 2015 he was taken off at half-time in an All-Ireland final. Over the past five finals has averaged three points from play.

Science aside, that is down to focus, drive, mentality and an incessant desire to succeed. Hats off to them, six and counting.